How To Create And Use Variables

Here's how to get started with Variables and use them within your apps.

Variables are the primary means of storing and referencing data in your Tulip apps.

When you want to store the value of a text input or access a pre-determined property of the app, you need a variable.

Or, when you want to calculate specific values based on past user decisions within the app, you need a variable.

Variables can either reset upon app completion or maintain their values through multiple completions depending on your specific use case.

When designing an app, a variable is often used to store the output from a device.

A variable can also be used as the condition for other triggers which will drive app logic, either by:

Variables are also needed to build detailed reports in the Analytics tool. If you want to individual data points from the operator, you will need to capture them in variables.

How to Create Variables

There are two primary ways to create a variable in the Tulip App Editor:

Note: Check out the "Using Variables Within Forms" section in this guide to Form Steps to see how to add variables to Form Steps.

In order to create a new variable through the App Variables dialog, follow these steps: 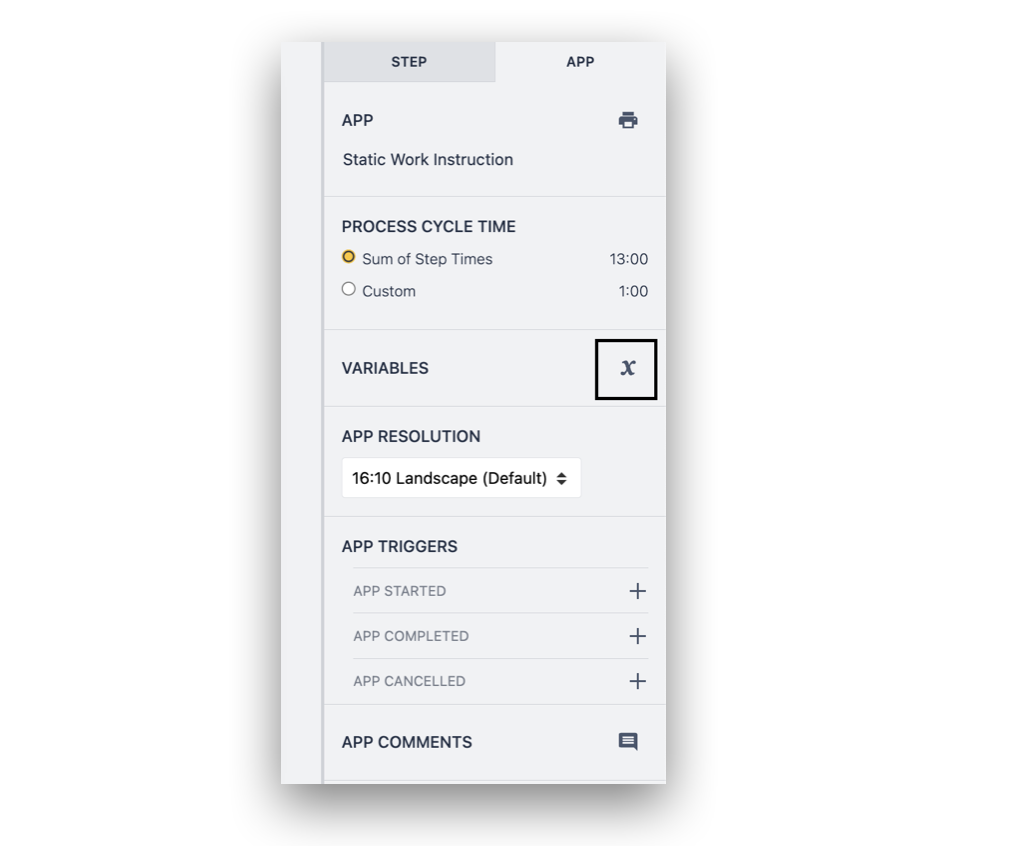 3. The modal that opens when you click on the X next to “Variables” shows you the variables in the current app, along with associated attributes as described below: 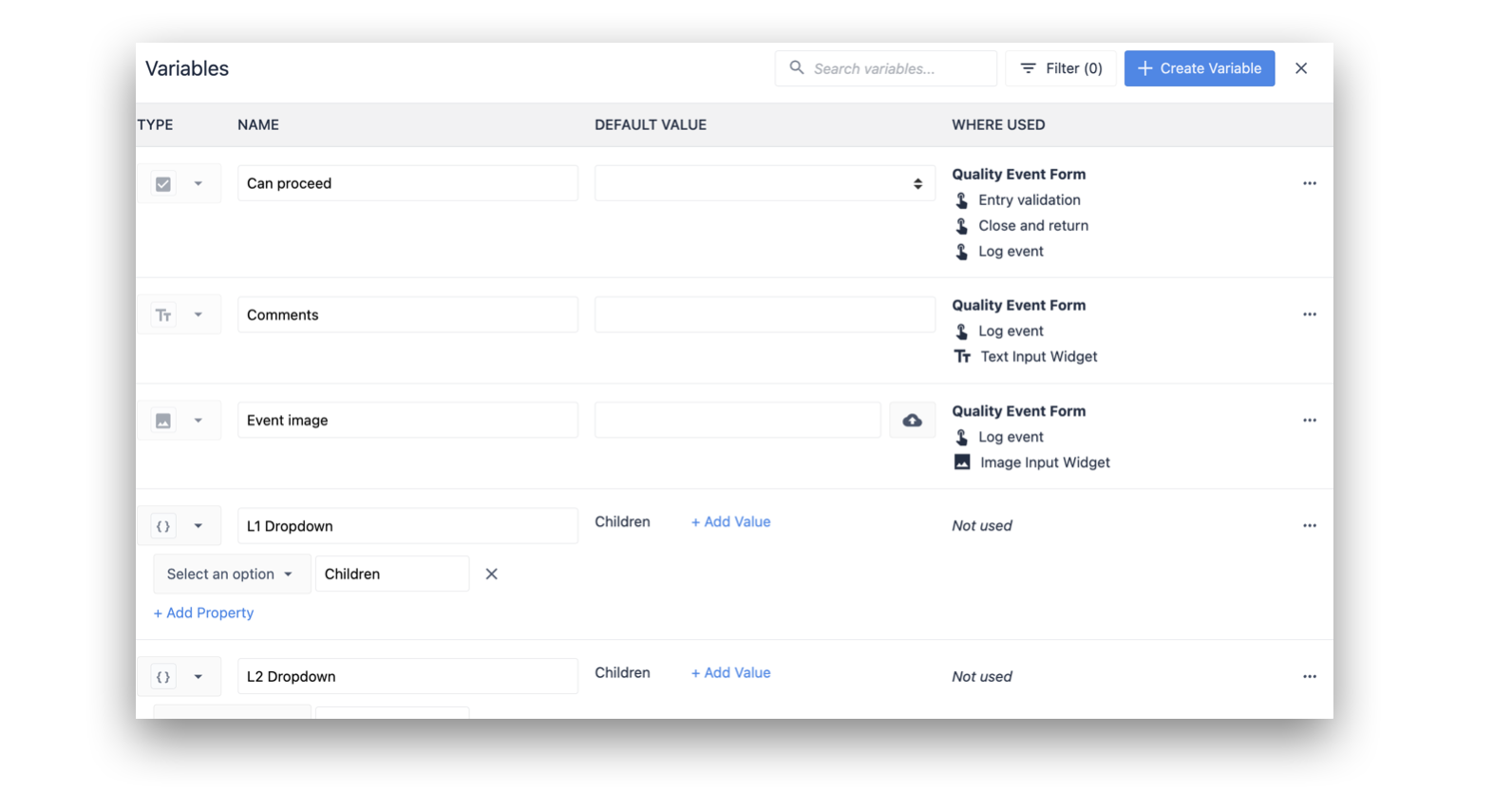 Type: The type of data being stored in the variable. This can take on one of the following values:

Objects are complex variables. That means that they cannot be created within the App Variables dialog, but can be edited after they are created.

Arrays can be created via a "Mulitselect" field in a Form Step.

Objects can be created by storing the output of a Connector function in a variable.

For more detail on complex variables, see this guide to arrays and objects.

Where used: A hierarchy displaying the step name and trigger / widget where the variable is in use.

Clear on Completion: Whether or not the data in the variable gets cleared when the app is completed. Please note: these variables will be cleared after the "Complete and Go To Splash Screen" action.

Save for Analysis: This toggle will be on by default. If you do not want a variable to be sent to an analysis for any reason, you may uncheck this box. Some variables may only be used for app logic, and are not needed in analytics. In these cases, it is best practice to not send them to analytics. Un-toggling non-essential variables may also help your analytics load faster as there will be less data to load in high-volume scenarios.

Default Value: Set an initial value for the variable every time an operator starts the app

Delete: The delete action only becomes visible when the ‘where used’ section is empty in order to avoid breaking logical flow in the app.

4. Click Create Variable and type a new variable name into the variable name text box and select the appropriate type from the Type dropdown. 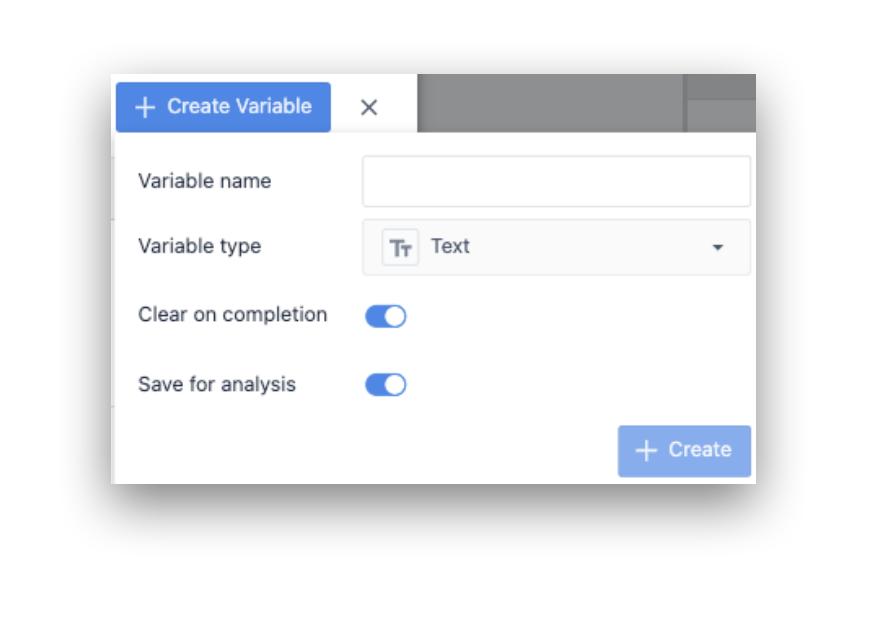 If you want the data in the variable to persist when the app is completed, un-toggle the ‘Clear on Completion’ toggle and then click the "Create" button when finished. You should see your new variable appear immediately in the variable list below it, with nothing in the ‘Where Used’ column and the "Delete" button active.

When creating or editing a trigger, you can create a variable by following these steps. 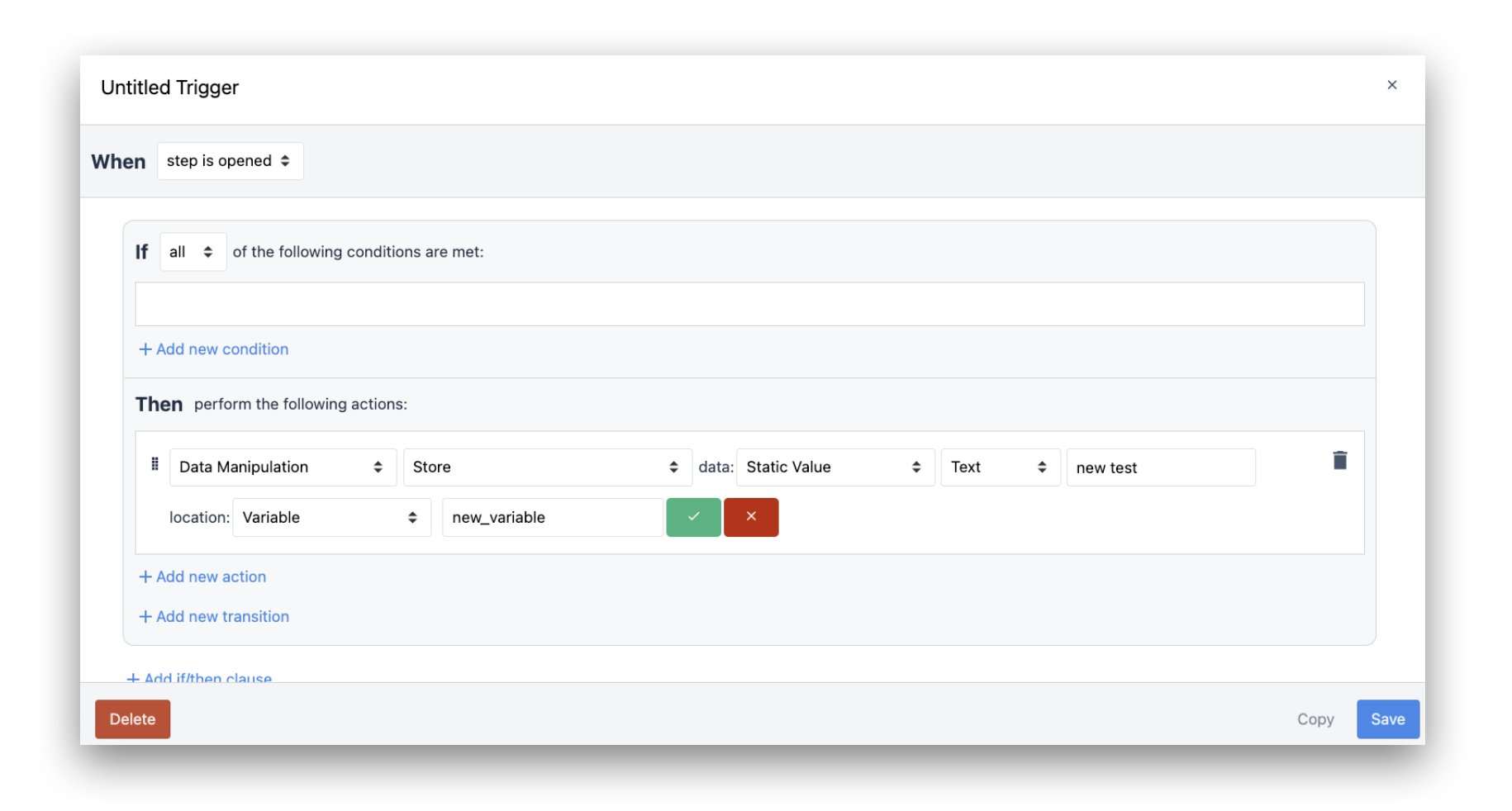 5. Enter a name for the new variable and click the green check button next to the variable field. Then click the "Save button" at the bottom of the Trigger Editor. The variable you create will be available to edit in the App Variables dialog.

Persistent variables allow you to save a value in a variable across multiple app completions.

Persistent variables save values relative to each the device running the app. They will not be overwritten if the app is used on multiple devices simultaneously.

So, if you have a visual andon app with a persistent variable that runs on 5 production lines, each line supervisor can update the variable on their app and the values will not be overwritten or conflict. They exist independently on each tablet running the Player.

The last way to create a variable is through a Form Step. Check out the "Using Variables Within Forms" section in this guide to Form Steps to see how to add variables to Form Steps.

How to Use Variable Text

Once you create a variable, it becomes available for use in the actions and conditions of newly created and existing triggers in the same app. It is also available in the Text widget which is accessible from the Toolbar in the App Editor.

In order to access the value stored in a specific variable, select the relevant variable name from the Variables dropdown in the Context Pane: 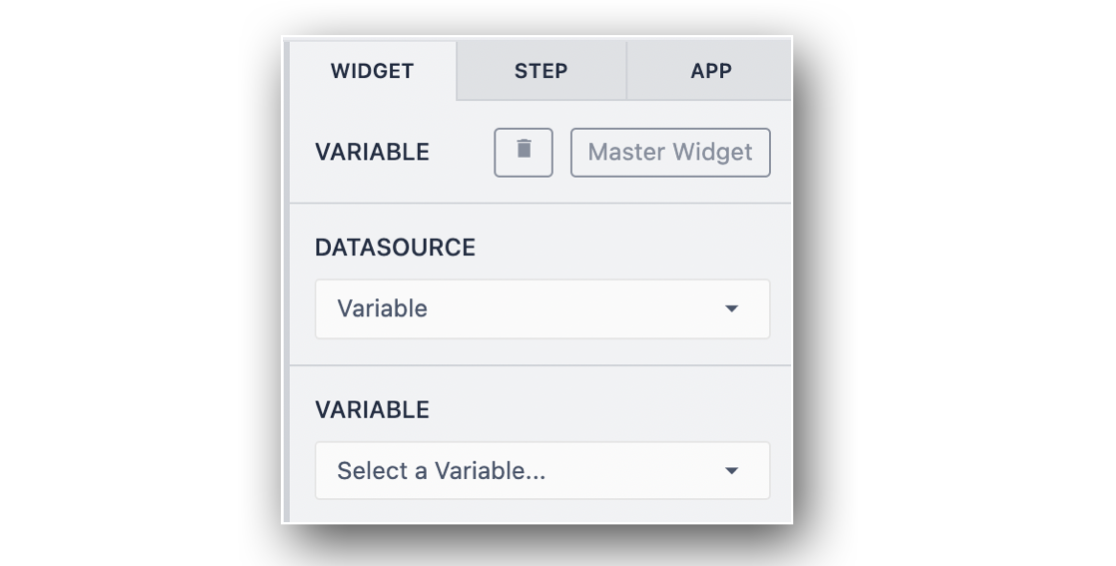 You will be prompted to select your Datasource:

It is worth noting that variables are stored on a per-app basis, so there are no step-specific variables and they cannot be shared between apps.

How To Delete Variables 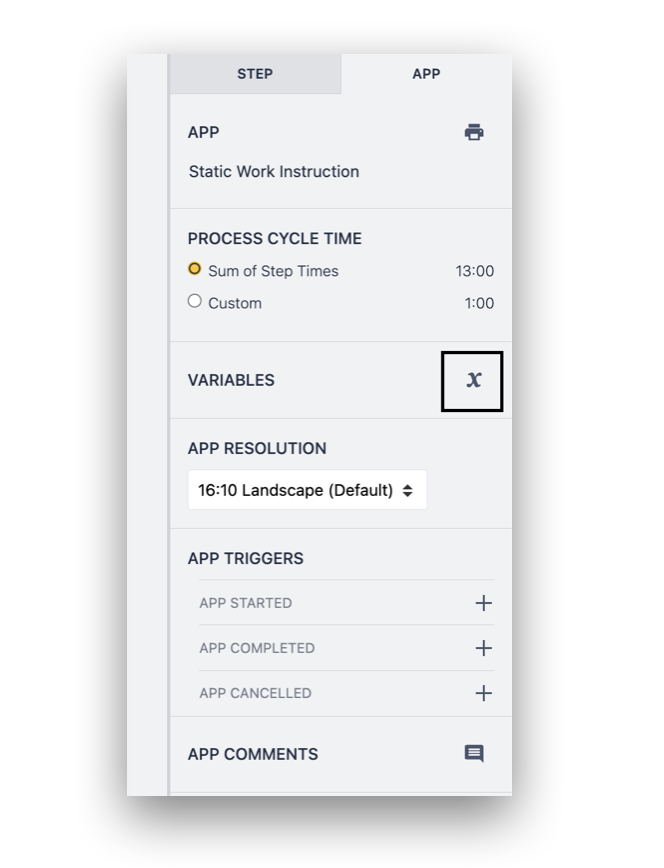 Use the Filter By search box to find the variable you wish to delete.

Then, click the ellipsis icon on the far right of the modal to delete the variable.

Note to delete a variable, you must remove it from all Triggers and Variable text widgets where it is being used.