Check out this hub for all of the most common questions around all things Tulip + IIoT.

Written by Pete Hartnett
Updated over a week ago

What is the edge and what is an edge device?

The Edge in operations is where the physical world is connected to the systems that collect data, display information and communicate with other systems. The Edge is not just relevant to machine connectivity use cases, but also when cameras, sensors, IoT devices, etc. are collecting and displaying information for streamlining workflows, guiding workers, and documentation.

Edge Devices transfer information to and from the sensors, machines, scanners, printers, etc. In some cases, machine data may already be collected by another system and Tulip can connect with protocols. Edge computing is necessary when the raw data collected from the devices need to be adjusted to match the systems where the final data is stored in the cloud. Protocol translation (via Node-RED) is an example of this.

Historically, the way that the Edge has been configured is very static, ignores human data, and relies on centralized systems that are difficult and expensive to set up.

What is the difference between an edge device and a gateway?

It depends who you ask! Generally, edge devices are the device sitting furthest from the cloud in an IIoT configuration. Edge devices are the layer the world interfaces with to talk to the cloud, this could be sensors, or smart devices. Gateways are simply devices that act as an interface between edge devices and the cloud, not acting as the source of data, but just the middleman to pass it to other systems.

Tulip supports 2 primary edge devices, the Edge MC and Edge IO. The Edge MC is the biggest bang-for-your-buck if you are looking to interface primarily with USB devices (tech specs). The Edge IO replaces the IO Gateway (discontinued 2021) and offers 6 USB inputs along with GPIO, serial and analog-in functionality (tech specs).

I can't get my edge device to connect to my plant network, what should I check?

If your device has already been registered, going to:

will allow you to see the current network status of your device.

The device does not require any incoming ports to be open from any outside locations. Outgoing requirements are on the networkHealth page(linked above) as well as NTP (port 123) and DNS (port 53). NTP is optional but highly recommended.

What is the difference between each type of analog in?

SAR ADC: This 2 pin input supports voltage input from 0-10V. Here are some supported devices, but many others exist:

Diff ADC: Differential ADC measures the voltage difference between each of the two input pins with a range of -3V to 3V. Here are some supported devices, but many others exist:

CS ADC: Current Sense ADC. Designed for 24V IEPE (a common protocol for industrial sensors, most often vibration sensors and accelerometers). Here is a supported devices, but many others exist:

Can I use the Phidgets hub data within Node-RED?

Can I use camera on my edge device?

Right now, no, but this functionality is in the works. This includes both Tulip Vision and basic image capture.

Can I use other supported devices on edge device USB?

Check out this guide that walks through what devices are supported by our edge devices.

Many other devices can also be interfaced with, with the help of Node-RED. Check out this Node-RED explainer to get kickstarted with Node-RED.

Do I need Node-RED?

Check out this handy guide.

Why do I need Node-RED?

Short answer - Usually you don't, The Tulip platform enables TONS of functionality right out of the box. Node-RED is just a tool to further expand the scope of what is possible with Tulip.

Long answer - Here is a great explainer that walks through the 6 different reasons you might want to use Node-RED.

What do each of the Tulip Node-RED nodes do?

How to I manage the Node-RED flows across a plant full of devices?

What kind of authentication do the edge devices have?

Tulip Edge devices use secure TLS and HTTPS encryption for all data transfer to the cloud. Unencrypted traffic is only used in a backup NTP function when NTP is not allowed or for local setup of the device itself via the device portal.

Access to the devices (outside the web portal) requires pre-configured private keys to which only designated Tulip employees have access.

What can’t I do in Tulip if Node-RED is enabled on my edge device?

When Node-RED is enabled some functionality won't be available within the Tulip trigger editor. This is insure there aren't two systems trying to write to the same output.

For example, If N-R was telling pin 1 to go high but a Tulip trigger was telling that same pin to go low, what should that pin do?

I disabled then re-enabled NR on my edge device and now all of my flows are grayed out - how do I fix this?

When Node-RED is disabled on a device, all of its flows will automatically be disabled. If Node-RED is re-enabled your flows will show up with dotted wires, and a Ø in front of the flow name. 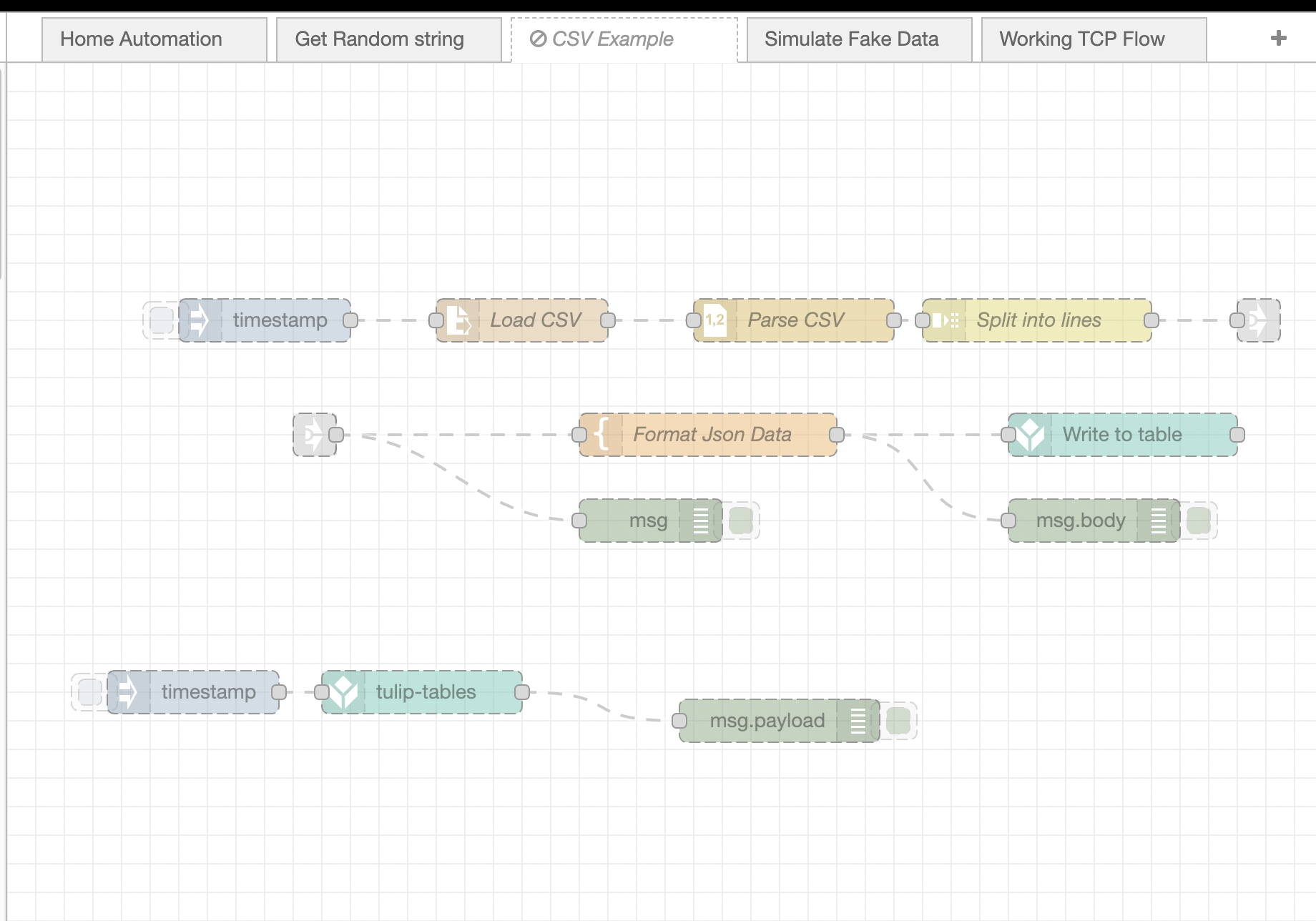 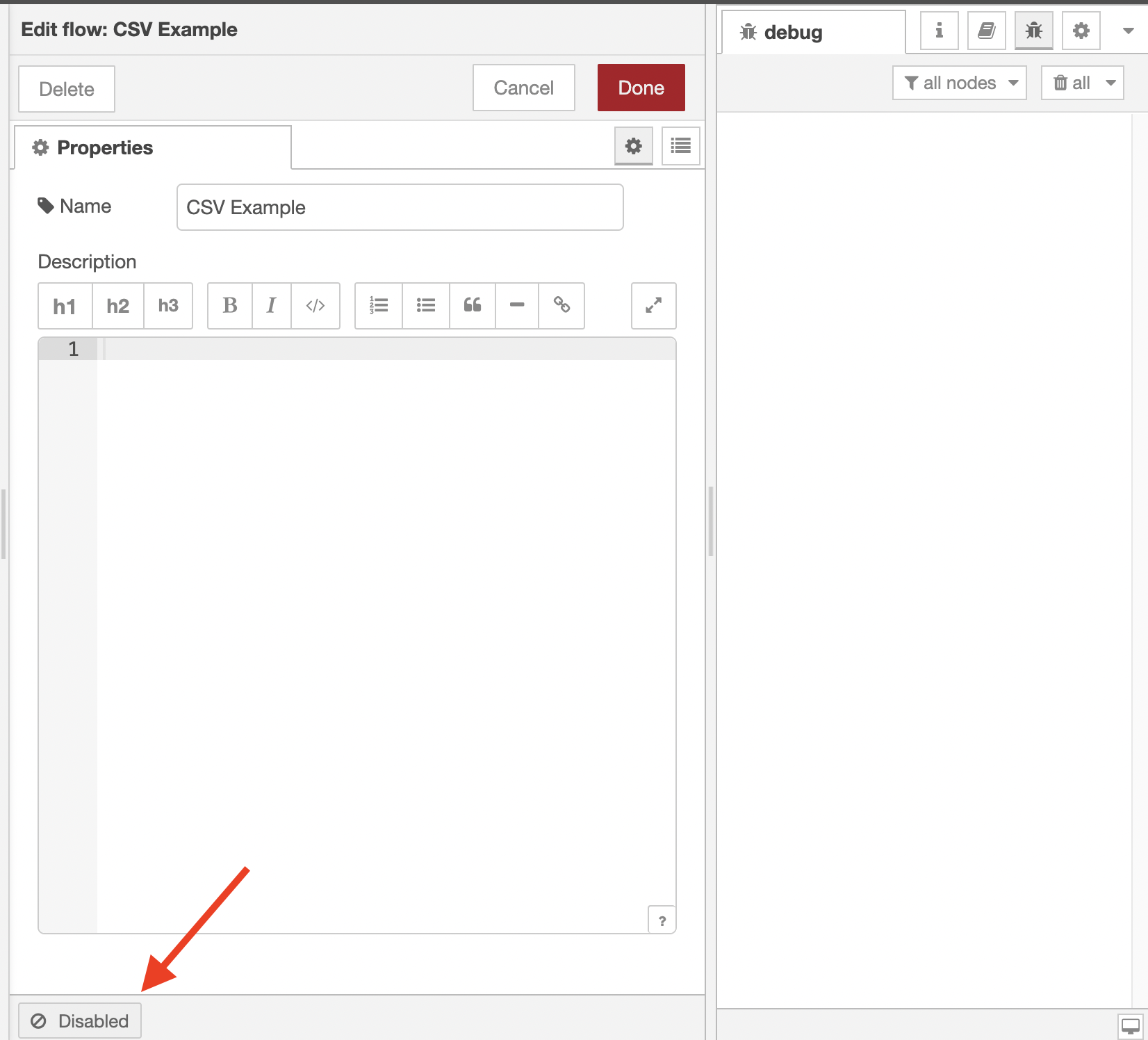 What monitor should I use with my Edge IO?

Any HDMI monitor will work with the Edge IO, but a mini-HDMI to HDMI (male-to-male) cable will be needed.