All Collections
Analytics
List of Fields in the Analytics Context Pane

A Guide to All the Possible Fields in the Analytics Builder.

Below is a description of all the possible fields that can be selected in Analytics.

It is important to note that all Analytics and fields utilize values from the Completions tab.

Aggregation Functions denoted with * can also be utilized in Expressions for more complex Analytics.

Example: Finding the total percentage of defective parts from the number of completions. 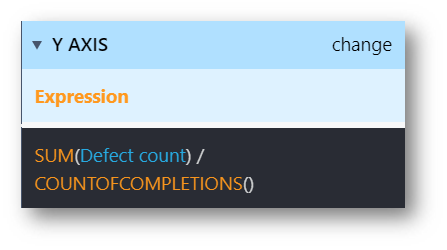 A summation of all the completions that have successfully run in a given app or apps with the selected criteria. If there is no set criteria, this will return the total number of completions.

Percentage of completions that match a given criteria.

Frequency that the given criteria is True. Often, this is a good place to check for FPY using a Boolean "Pass/Fail" variable.

Returns the total count of completions that match a given criteria.

Returns the total count of completions that match a given criteria that is False.

Gives the average of a number variable.

Gives the median value of a number value.

Provides the summation for a variable. For more complex and conditional sum statements, SUM() can be used as a function in the Expression Editor.

Returns the minimum historical value of a given variable.

Returns the maximum historical value of a given variable.

Returns the most frequent value of a given variable.

Returns the standard deviation of a number variable or expression, categorized by the X axis.

Returns the 95th percentile of a numerical data set. This value means that 95% of the values are below this number.

Returns the 5th percentile of a numerical data set. This value means that only 5% of the values are below this number.

Similar to ratio, but takes in two conditions of any type. These conditions may be set when one variable or field is equal to a given condition. It may also be a number variable or an expression. This also takes the first argument as a numerator, and the second as a denominator.

Fields are best used as an X axis, or something to Compare By in analytics. This article has some more information on Fields.

Similar to User, but gives the assigned Badge ID instead of the name.

Which station the app completed at.

When the app began working towards a completion.

When the app completed.

Groups app completions by the week they completed. Useful for viewing aggregations on a week-by-week basis.

Categorizes data by the Shift Type worked. Only applicable to Enterprise Accounts.

Displays or categorizes the duration of the Shift Type. Only applicable to Enterprise Accounts.

Categorizes completions by the status of being a scheduled workday or not. Only applicable to Enterprise Accounts.

Categorizes completion data by the day of the week. This will aggregate matching days. For example, if given an All Time range, the analysis will stack all Monday values together.

Categorizes completion data by hour of the day. Aggregates similarly to Day of Week.

Distills all data to the hour it was completed. This field gives all historical data by hour, and is not aggregated like Hour of Day.

Displays the overall runtime of the App completion.

Categorizes data by which app the data came from. Applicable only to analyzing data from multiple apps.

Groups app data by the Version of the App ran to create the completion.

Here, you can select any table field that is used within the app in the analysis. For more detailed information, check out this article on Table Analyses.

A list of all app variables used within the target app can be found here.

All steps within the app are listed here, in the form of cycle time spent on the steps.

Example 1: find the average time spent on a given step. 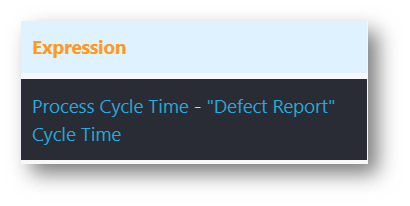 Provides a list of all the fields used within application form steps. 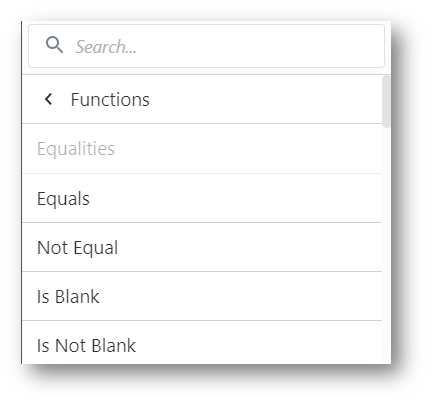 Functions vary slightly in each place used. The entries for variables and expressions may differ slightly when used in the X-axis, Y-axis, or Compare By fields. The following will outline what each function does.

Checks for equivalency between a variable or expression to a given state or value.

Checks that a variable or expression is not equivalent to a given state or value.

Checks for completions where the given variable is blank.

Checks for completions where the given variable has a value.

Not acts as a modifier to use another Function. It will check for completions where the inverse of the given Function(s) is satisfied.

And is another modifier which allows for multiple Functions to be checked, and returns completions where both statements are satisfied.

Or is a third modifier which allows for multiple functions, and returns completions where any of them are satisfied.

Checks that a numeric value is greater than a given value or expression.

Greater Than Or Equal To

Checks that a numeric value is greater than or equal to a given value or expression.

Checks that a numeric value is less than a given value or expression.

Less Than or Equal To

Checks that a numeric value is less than or equal to a given value or expression.

Checks completions that were in the previous N days. Working days are set on a default, unless defined by Schedules (Enterprise Accounts).

Allows binned separation of a numeric value. This allows a histogram to be made in any number of bucketed value ranges with a selected minimum and maximum range.

Returns the data of the first variable unless it is null. In that case, the second given variable is returned.

On the X-axis, groups completions by the length of a variable in digits. On the Y axis, can be used with an aggregation function to check a given length.

Checks that a variable begins with a given value.

Checks that a variable ends with a given value.

Checks a variable contains a given value.

Checks that a variable matches completely with a given value.

Checks that a variable is anything other than a perfect match to a given value.

Not yet released. Checks that the contents of a variable matches the given value anywhere.
Example - Variable value 'ABCDE' contains all of 'BCD'

Does Not Contain All Of

Not yet released. Checks that a variable's contents do not match the given value anywhere.

To better understand these functions, try playing around with sample data. The Tulip Terminal app in each instance has sample data to use. Make sure to filter the analysis to All Time to test the Analytics data.