How to Run Date and Time Calculations in Apps

Many aspects of operations rely on checking the amount of time that has passed between two events. Here's how to find that time.

Checking the time passed between two timestamps is often a crucial aspect of any process.

Adding logic to the time between two timestamps can be very powerful for both data collection, as well as app actions.

A few use cases for this functionality:

This guide will show you how to build out a few of these scenarios in your app using a combination of triggers, tables and the Expression Editor.

The three examples covered are:

In this example, we will show how to calculate the difference between a two timestamps within a single usage of an app.

For this example, you should have an understanding of:

On the desired "Starting" point for this process, add a "Then" statement in the Trigger Editor to capture the current date and time.

On the desired "End" point of this time measurement within the app, add another trigger to capture of the current date and time.

In addition to capturing the time, you can also now add the trigger to find the difference between the two timestamps, and store it in a variable.

In this example, both times are taken when a button is pressed, but it would also be possible to capture times for when steps close or open, or when devices fire.

The time difference is stored in an "Interval" variable in terms of total number of seconds between the two timestamps.

For this example, you should have an understanding of:

In the following example, the app's goal is to check a "Machine Inspection" table, and determine when the last inspection occurred. Further, if the inspection is greater than the required frequency, the app will direct the user to complete an inspection.

The first step in this app will require a table record to be loaded into the app. Therefore, the table must already exist. The table might look something like this:

Above, the table contains both the last time the machine was inspected, as well as the required frequency of inspection for each machine. 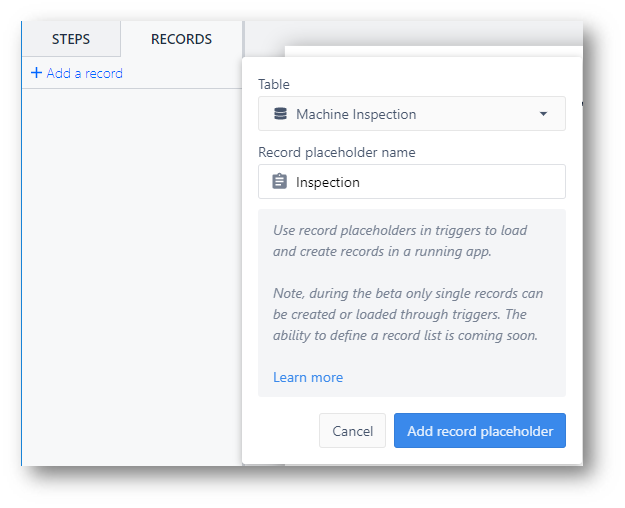 Now that you've linked the proper table to the app, you will need to create a variable to store the difference of the two timestamps. Creating an "interval" datatype will allow for this manipulation. You can do this by navigating to the Context Pane of the App Editor, and select app.

In the Context Pane, select the sigma symbol to create a new variable. 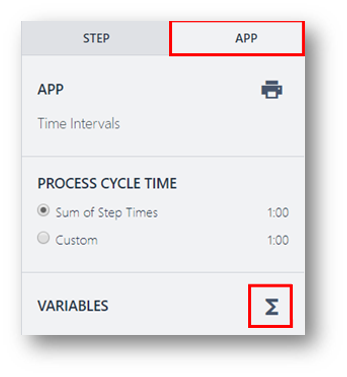 In the variables pane, create a new variable by any name you desire, and select the type “interval” from the dropdown menu. Note that this variable will hold the result of the subtraction of the two timestamps that will be manipulated.

Make sure to select “Add”, and make sure the variable adds to the list before closing.

Above, the variable is named "ResultantTime", and will mark the difference between times. In this example, this will note the time between the last inspection, and the current time of the app.

In order to check the appropriate table record, the table must be loaded by the correct Table ID. In this example, we will load a record based on the valueof a dropdown widget.

Note that the text will have to exactly match the table ID in order to appropriately load the correct table record. 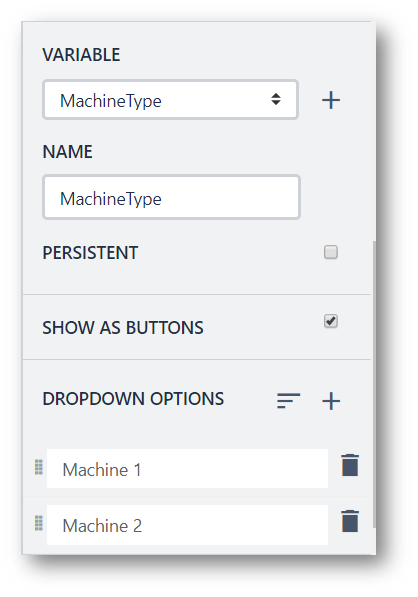 The form step above allows the user to select which machine will be checked. It is very important to make sure to add a variable to this field, in this case MachineType, to add logic to the result.

Now it's time for the check!

This form, when submitted, should check the time between the app's current time, and the previous timestamp from the table.

To do this, you will need to add a few 'custom action' triggers to the submit button.

First, the button needs to load the correct table record:

This table is loaded dynamically based upon the selected machine in the Form Step, rather than creating several actions to load certain tables.

Next, the submit button will find the time between now, and the timestamp in the table record loaded. In the same trigger, you might add something like this:

This statement will subtract the current time from the table's previous timestamp. It will then save this time difference as an interval datatype, into the variable created at the beginning.

In a new trigger, the difference between the two timestamps will determine an action to the app.

For example, if the time between now and the last inspection is greater than the necessary frequency, the operator must inspect the machine. If not, the machine is OK, and no action is needed. This might look something like this:

THEN
Go to Step - Inspection

Here, the check ensures that if the time has been too great, then the inspection must be performed again.

If it is not, the app can complete, since this app is used for checking and performing inspections.

Add a trigger to save the new time, like this:

Example 3- Setting the target completion date for a work order

Let's say that a work order must pass through 10 separate operations before it is completed.

When the work order starts at the first of the 10 operations, you need to create a "Due Date" to match the customer's expectations. Let's say that the due date is 1 week after the first operation is started.

To accomplish this in Tulip, you will need to add an interval to the current time in order to determine the time for a week in the future.

Then, you should save that "Due Date" in your "Work Orders" table. Here's how to do that.

First, you need to create a variable that stores the value for 1 week in the future in an interval.

Go to the Variables dialog in the Context Pane, and create a new variable called "next_7_days" with type interval.

Then, set its default value to 604800 seconds, like this. That is the number of seconds in a week:

Next, you will create a record placeholder for the current work order, and load that work order into the app. 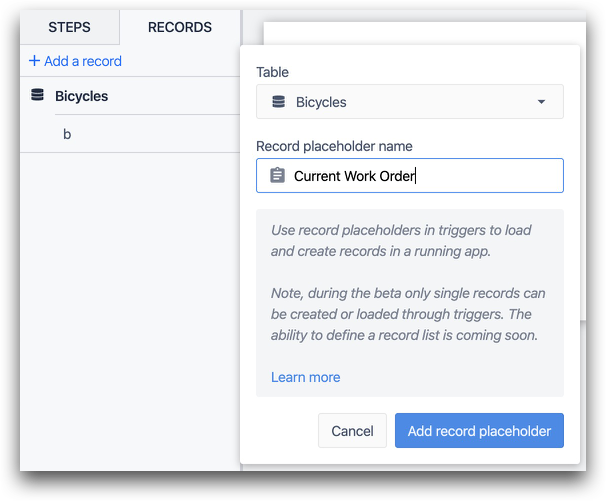 After the record has been loaded, you can set the "Due Date" field using an Expression:

In the trigger statement above, we add 7 days to the current date and time to create the due date.